Haunted Memories is a game of crumbling secrets, childhood memories, and hauntings.

Haunted Memories is a GM-less game to be played with up to 4 players, all former childhood friends. Years ago, they survived the Haunting, a nightmarish entity,  but now it has returned and has brought them back together. The bonds they once shared are ravaged by time with secrets, lies, unsaid feelings, and only their memories of the past can help them prevail in the Present Day. But some secrets and memories are best left in the past.

You will need a Jenga tower to simulate the crumbling secrets and personas of the past and the present.

In order to download this Roleplaying Game you must purchase it at or above the minimum price of $4 USD. You will get access to the following files:

Haunted Memories is a 27 page tarot-and-jenga-and-photograph-based trpg with a similar flavor to Stephen King's It; as kids you confronted a terrifying entity, and as adults you have to do it again.

The layout and graphic design here are excellent, and the pdf feels super clean and easy to read. There's a bit of art to break up the book, but it's essentially just shots of props and items that might be used to play the game.

Mechanically, you pull jenga blocks and try not to topple either of two jenga towers, but the game does something interesting here, in that you can never either fully win or fully lose. If a tower collapses and the PCs all die, you get to find out the secrets everyone was hiding and get closure for their pasts. If neither tower collapses, the PCs survive, but their secrets remain hidden.

Safety-wise, the game uses X-card, but because the topic of childhood memories when mixed with horror can really hit people harder than expected, you may want to combine this with Lines And Veils to outright forbid some stuff before gameplay even starts.

Overall though, if you like Dread, this is sort of Dread deluxe. It's more specific and a little more flavorful, but also less flexible. It does tell a potent story, and I would strongly recommend it to groups that like character drama. It's also a really great frame for a horror story, and I'm having a hard time imagining a playthrough of this game that doesn't  involve some genuine tension and terror.

-Page 11, pulling a block per player from each tower before the game's start creates a nontrivial risk of dying during character creation for medium to large groups.

-Page 13, revealing traits, "the player does not have to pull blocks from the Tower" does this mean it fully cancels the Haunt card, or does someone else have to pull the blocks in their place?

-Page 1 says that if either of the towers fall, "you each share your final moments." This is contradicted on later pages (including 16,) which imply only the person to topple the tower dies, and everyone else gets absolved. Which is true?

-Similarly, page 1 conflicts with later pages (including 18,) about the tone of a 'successful' ending. Page 18 and others imply that you can still have a happy ending where the secrets get resolved.

-Page 17, final para is missing a period at the end

Thank you for the review and I'll address the issue for more safety tools in a later update. Our original playtest group was small, so it will be addressed for groups larger than 6, especially for set up. For revealing traits, it doesn't cancel the Haunt card but someone else has to pull blocks in their place instead. The contradiction in page 1 and 16 was from an older edit, so it was meant to state that everyone gets their final moments (or moment of internal dialogue). The same issue arose from page 1 and 18, the 'happy' ending would have been survival in that case. I'm glad that my intent for a tense and terrifying story came through despite some inconsistencies.

All good! It's a really cool game. 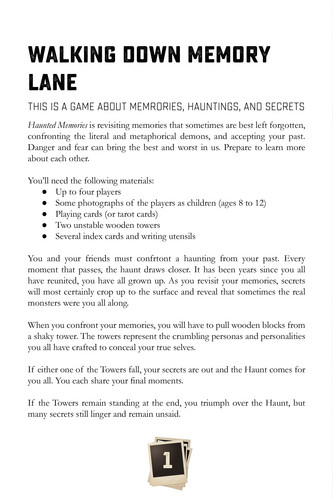 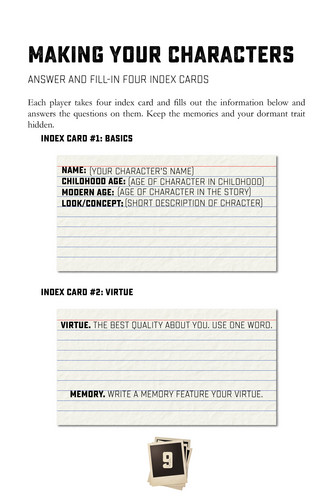 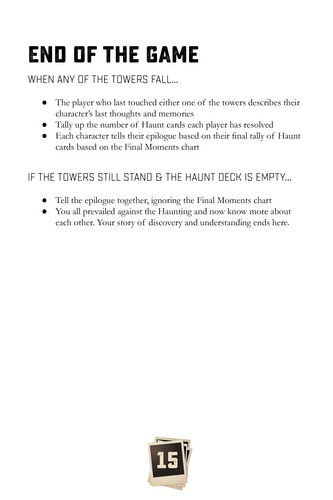 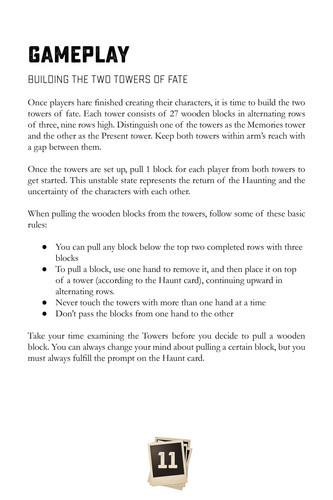 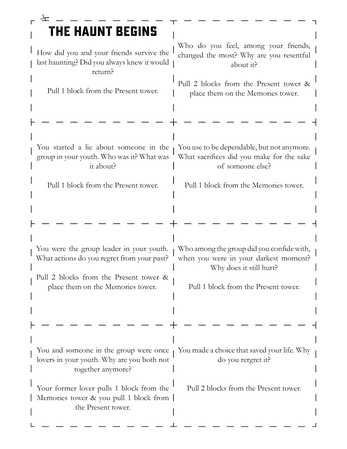 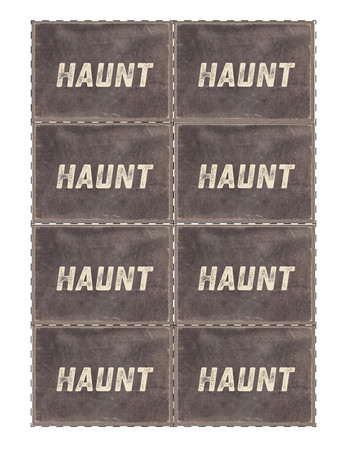